WOW, this is what I needed! After an horrible running week, I finally got my rhythm back :-D I ran 6.22K in just over 37 minutes, which comes down to 6min/km!!! And the funny part: I had 4 1 minute slow sections.

I started off with a 5k 2 8k interval training but after about 4k (4 sections of 7 minutes 145BPM and 1 minute 137BPM from the Podrunner interval website, the Gateway 2 8K section, week 1), my Bluetooth® headset started to act weird. The problem is, I have a Bluetooth® headset with the Bluetooth® receiver at the back, and a Bluetooth® HRM, with the receiver on the front and my phone strapped to my left biceps. The challenge with this is that Bluetooth® signals don't travel through the body... When I have my phone on the outside of my upper arm, everything is fine, until I look at my left. Then the connection with my headset breaks and the audio pauses. So as soon as I swivel my head back in a position where the connection is re-established, I simply push the middle button on the right side of my headset and music continues playing again. (As you can imagine, that middle button is the play/pause button) Can you guess what the left and right button do on that side for the headset? You have probably guessed it, they skip backward and forward. And as you most likely guessed as well, I pressed either of these outer buttons in stead of the middle button. Gone was my training podcast :( But this is a running blog and not a moan-about-crappy-techie-stuff-blog. I pulled off my headset and continued the last 2k without the guidance of a stead beat and the signalling of the end of an interval section and continued running. My Runkeeper app continued to talk to me every 5 minutes and/or every km so I got a fairly decent idea of what I was doing. This brought me to bring my average pace down in the last 400m from about 6.03 min/km to an even 6.00 min/km. And boy oh boy was I a happy man when I made it! Over the next few weeks I will be trying to add to the distance I can run. For me, distance is more important than pace at this moment. Don't forget, I need to get to 10mi (~16k) by September 23. That doesn't mean I don't want to run it in a decent time but running it is my first priority. Doing so in unde 1:30:00 is my second ;-)

Till the next blog

Greetinx
Johan
Published by David on 12:23 PM No comments:

The search for excuses

Oh boy, I thought it would become easier over time, but my 5K today was a 34:44. My wife would now use a saying which literally translates to: The bow can't be tensed all the time. Which basically means you can't always perform at your peak. Okay, I get that but I want to increase my distance and not the time I need for a 5K. In fact, I want to triple the distance in the next 3 months. So what's the cause of the increased time? Is it the night I was called for stand-by 5 times last Wednesday followed by a night of bad sleep on Thursday? Was it the mental drawback of the Dutch National team performing their worst group phase in a European or World Championship only being outperformed in badness by the Irish team who scored one less goal than "us"? (Hmm, I think I can safely scrape that one off the list) Or was it the tough Aikido training we had yesterday in preparation for our 5th Kyu exam next week? It could also have been the sore throat I'm sporting (although sore might be overstating it quite a bit but hey, I'm on the prowl for excuses here). Oh, no, I know what it must have been! I forgot to charge my bluetooth headset, so every time I turned my head the wrong way, my phone which was playing the 138BPM mix by DJ Steve Boyett faulted and I missed a step... (yeah right, that must be it)

Or could my wife be right and I just have to carry on and all will be well? Nah that could never be it, that would mean that I can't blame anyone for my lesser performance. But do I have to?

NO OF COURSE NOT. It was just a lesser run. It wasn't all bad. Well not the first 20 minutes anyway. After that I got a little tired. But I still finised the 5K (and a bit) in 34:44, including 2 walks.

Oh, I almost forgot, I bought myself another nice little gadget. The Polar WearLink®+ transmitter with Bluetooth®. It works great with the RunKeeper app for Android (No, it doesn't work with the iPhone) on my Samsung Galaxy S3. Talking of which, I got that almost 2 weeks ago and guess what, it was a little bigger than the S2. Which meant that I had to get myself a new armband for it :-( I had this Belking Dualfit Armband for the S2. It was okay. But now, I have this Muvit (Hmm, why is their catalog page so bad???) armband and it is much more comfortable.

Greetinx
Johan.
Published by David on 4:43 PM No comments: 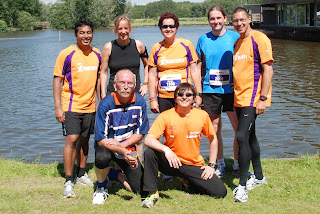 WOW, what a thrill!!! After the first K I didn't think I was going to make it. I went too fast and I was get out of breath rapidly. Sooo I slowed it down a bit. Same rhythm shorter strides and once my heart rate slowed down to around 155, I kept the pace as steady as possible and once my Runkeeper app told me I ran 2.7K in 15 minutes (this time I decided to start the monitoring after my warming-up), I felt the fatigue slide away and the energy boost was amazing. The next 2.3K were mostly a breeze. Once I hit 5K I could have gone further but I decided not to overdo things and went into cooling down mode.

So, just a little over 1 week to go before the Run for KiKa 2012 for which we can still use all the sponsors we can get, so PLEASE, PLEASE, PLEASE show your support for KiKa at http://goo.gl/7ZZd3 Your help will be highly appreciated.
Published by David on 9:51 PM No comments:

Search this blog and linked pages